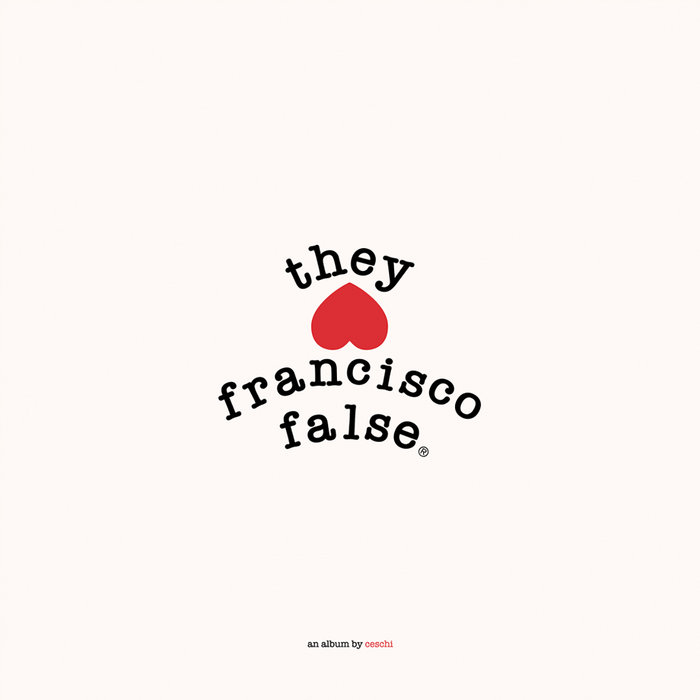 Joseph Sands Quite possibly my favorite album, the best entry point to Ceschi (since it’s become an all-time fav for almost every friend I’ve introduced it to), and my most hotly anticipated vinyl of the near future. It’s an incredibly pained, truthful, human, splendid and completely cathartic release of a short lifetime’s heartache. Do yourself a favor and listen if you haven’t yet. Favorite track: Frank Propose.

For the first time in 15 years, Fake Four Inc. and Europe's Mism Records are offering the classic album 'They Hate Francisco False' by Ceschi on beautifully packaged vinyl including remastered versions plus a poster with lyrics.

PLEASE NOTE * ALL EURO ORDERS SHOULD PURCHASE FROM mismrecords.bandcamp.com FOR BETTER SHIPPING RATES

Some words from Ceschi: "in 2006 “they hate francisco false” was released by my friends at dayton, ohio’s net31 records - a short lived off shoot of beyond space entertainment that had released my first solo album, fake flowers two years earlier. we had a strict deadline on the manufacturing of this cd because i wanted copies sent to hawaii for a series of shows with k records artist little wings. hawaii was an early hub for my music, people there traded by songs via tape, cdr & mp3 even before i ever had an album. through the help of phil elverum (the microphones) i was able to invite little wings to perform some shows with our band anonymous inc in oahu. as a procrastinator and over-thinker, i think it’s probably best that this album was hurried - or else it may have never been finished. tony from net31 pushed me to get this done - and the cds just barely arrived in time for our mini tour. kyle from little wings & i have been good friends ever since. looking back, this record represents a breakthrough moment of coming into my own style, finding my voice & defining what “ceschi” music meant..."
(continued in the liner notes included with the physical vinyl)