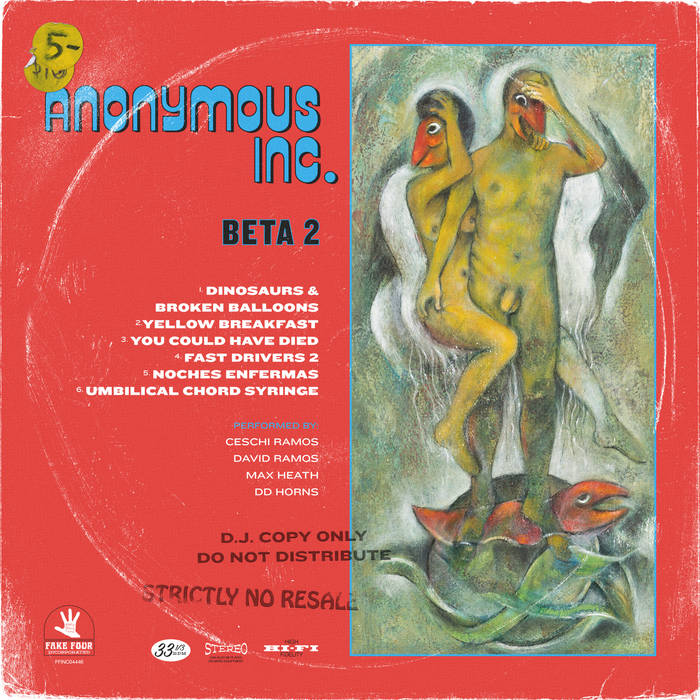 The BETA EP series is a collection of forgotten Anonymous Inc. tracks recorded between the years 2001 - 2007 and resuscitated, mixed, edited & polished by Max Heath in 2017.

Anonymous Inc. was a grunge band started by brothers David & Ceschi Ramos in their Mother’s basement in 1994. Shortly after the initial grunge years, elements of hip hop, jazz fusion indie & progressive rock sounds were introduced as part of their overall musical style. Captured moments of improv & youthful experimentation along with collaborations with many musicians & rappers such as iCON The Mic King, Shoshin, Tommy V, Dose One & Circus all helped form their first self titled full length album in 2001. Shortly after that release, In the early 2000s, pianist Max Heath became a vital member of the band.


by David Ramos:
A long time ago, before laptop studios and SoundCloud enabled artists to record and immediately release their songs, there were half-functional Roland VS 880 home studios with cryptically labeled external disks, full of forgotten files. These songs were often lost to dreaded “disc errors,” or in our case, a basement flood that washed away years of work. Oftentimes, they weren’t meant to be heard beyond the safe confines of our duct-tape enveloped headphones. Some weren’t worthy of albums, and were best left in the archives. As the dusty ez-drives became obsolete, we transferred the contents to computers, shifting from one digital cemetery to another. Although we recorded dozens, if not hundreds, of unreleased songs, each one held unique value. Each represented some element of hope. There was the hope of capturing some moment, feeling, or theme. There was the hope that somehow this one track might resonate with someone else’s shared experience. As the years passed and our lives were lived, these songs remained, floating precariously in digital limbo. The good songs were backed up to multiple computers, on multiple drives, with multiple titles and versions. They captured the spirit of what felt like a prolific era, when writing and recording new music was an effortless ritual.

Our decision to go back and evaluate these artifacts came with a certain trepidation. Would our current musical and aesthetic standards sully our past creations? Still, we knew (or at least hoped) that there would be something entombed in our hard drives that deserved to be unearthed. Opening file after file, not touched since our early twenties, we found songs that represent who we were and who we have become – both as artists and as people. Each song stimulating a different set of neurons, rekindling the shrouded memories of our youth. You can almost smell the basement: a mix of spray paint fumes, mildew, and teenage bodies. These songs are our memories; a window into who we were then. Hopefully, they translate beyond this nostalgic and hyper-personal significance. Either way, these are the ones that we feel are worthy of being released. These four Eps – Beta 1-4, recorded between 2002 and 2007 – capture an era as we heard it, filling the contextual gap between our last album (released in 2001) and our next studio release (which we are currently recording). We hope you enjoy them as much as we enjoyed rediscovering them.