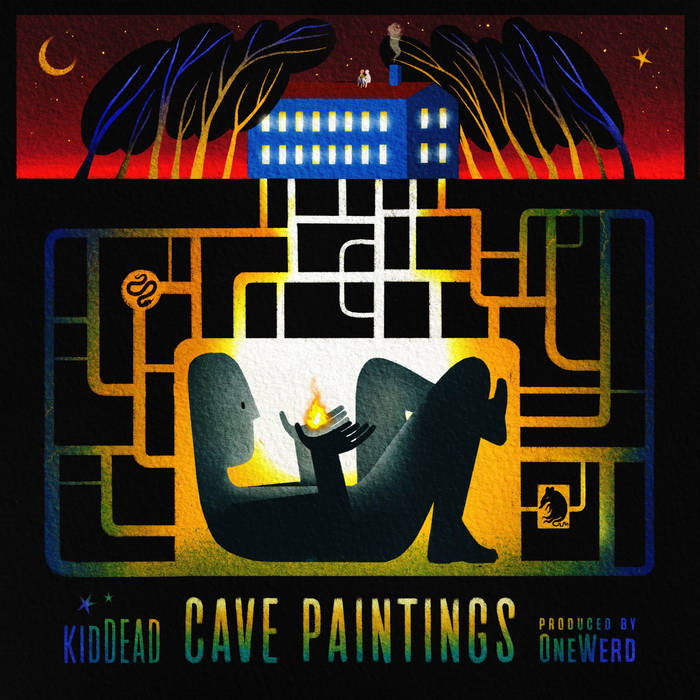 OneWerd: "Pretty much as soon as kidDEAD and I met we started talking about working on some music together. We had ideas for a couple different projects, but decided to start with a solo album from him over a batch of beats I had created while I was producing Timeless. Ross had pretty expansive professional and social circles, so it was pretty easy for him to pull together a group of fire features, and the project started to materialize pretty quickly. At some point, the lines started to blur on whether this was a strictly production collaboration on my part, and Ross decided to include a few stray tracks we had dog-eared for a later rap collaboration between the two of us. The only track that Ross didn’t give prior approval for on the album was “Imaginary Friends”, which was based on a beat we had saved for our other project. I had forgotten that I had the verse he had sent me for the track a while back, and decided to finish the song and include it, figuring he had already approved all the collaborations we had that he knew of. In the course of a year or two, a pandemic, working on a podcast together, struggling with difficult mixes, and Ross starting a new career, there were definitely some bumps along the way. At one point it even seemed like the project might not come out… Ross and I had gotten deadlocked about mixes, the pace of our progress, and all the other various complications that come up when collaborating. It’s strange to look back on all of that and realize that this might have never happened. Considering that after losing Ross is particularly strange…the things that bring people into our lives, the petty details that can get between us, and how stories just come to an end have all taught me how delicate our relationships are. About a week or two prior to his passing, Ross and I had a phone conversation after a period of relative quiet between us. I’m grateful beyond words for that call. We were able to talk about some of the things we had been going through, and decided to continue on with this project and the podcast. He sent me the final files immediately after, and I remember feeling really grateful that we were still friends, and excited and hopeful to be looking forward to the work we were going to continue doing together. It was strange to listen to those files later, as well as watch the music video for Cave Paintings that Ross made with his friend Emerson. Hearing and seeing him say things I’d never heard from him before felt like being able to have a conversation with my friend again for a few brief minutes. His voice alongside those of our comrades on these songs brings back the same camaraderie we’ve shared on stages, at bars, in living rooms, and in recovery rooms all around the world. It reminds me of the joy kidDEAD brought to all the friends, fans, and comrades that got to participate in his journey. I frequently think of how I might feel differently if I hadn’t gotten that final call from Ross. Knowing that the final words and moments of our friendship were full of hope and creative inspiration is something I’ll be forever grateful for. I’ll always think of this project as a parting gift from my friend, and a final lesson on how precious and delicate those bonds of friendship are. I hope you enjoy our work.
🖤kidDEAD forever🖤"

We will be supporting the charity www.nashvillebailfund.org with the proceeds of this release