Get fresh music recommendations delivered to your inbox every Friday.
We've updated our Terms of Use. You can review the changes here.

Holes In Our Stories 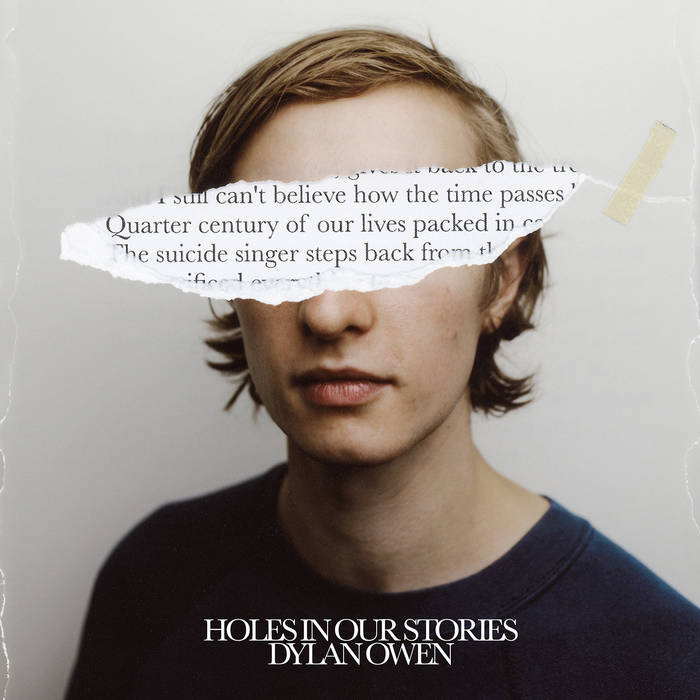 Fake Four is proud to present 'Holes In Our Stories' by Dylan Owen on beautifully packaged vinyl LP, marking Dylan Owen's first time on vinyl. This album is dedicated to anybody who has put themselves back together after a terrible loss.

In 2019, Dylan Owen joined Ceschi on on select tour dates across the U.S. following the release of his long-awaited full-length album 'Holes In Our Stories' and his self-published book 'Revive the Great Adventure.'

I want to thank every single fan who believes in my music and keeps it alive — you are the reason it is around today, and I mean that wholeheartedly. My advice for you is to send your letters, to confront your most uncomfortable fears, and to understand that you are not alone in anything."

Thank you for making this bigger than me."

Special album website with liner notes, an explanation of the metaphors, and music videos for every song: holesinourstories.com

I’ve had the idea that life is supposed to be a great adventure since I was 8 or 9. It started around the time of my parents splitting up.

For years, I thought love would be my great adventure. I thought I’d never find something as exciting as my first cross-country romance. As enlightened as the way she talked about the Mountains like they are proper nouns, deserving of capitalization. I still have recurring dreams where I visit her, but in these dreams, things have changed: she doesn’t want me to come with her to the airport, the wrong ending to our story is foreshadowed again and again…

I remember going to summer camp before my junior year of high school and thinking those two weeks might be my great adventure. I was learning how to write songs at camp, and I was hungry to become somebody. I took it all in, from my first taste of independence, to the depth of the greatest songwriters’ lyrics, to my own coming-of-age story when I would meet the same girl I’d later fall in love with there. So I romanticized it all: summer camp, the craft of songwriting, a cinematic relationship, and the idea of a perfect story. I romanticized life to a dangerous point—one that would be impossible to live.

There have been so many times in my life where I couldn’t help but feel like I was in a movie. Racing down the east coast interstate highways and saying a mandatory rosary on the way to camp with my grandfather, the first family member I would later lose, felt like a movie scene. I didn’t fully appreciate the ink stains on his printer hands until after he passed from being sick for a few years. Now I long to let ink and words overtake me as much as they did him in his lifetime. I’ve known a lot of people who have passed in the last couple of years. I think we all do. But our neighborhoods will always remember them. There’s a time in your twenties that’s tough, undefined, and I had already felt stagnant for a few years when my losses started adding up. I wasn’t becoming who I wanted to be. I watched my own years slip away. And I began to ponder the idea of death as my great adventure, too.

I lived at home with my mom for those dead years after college—I admit I grew terrified I would never leave my upstate town and become a man. I believed I had no remaining great adventures ahead. I felt surrounded by…numbness. Two cancers in two people I cared about in the same two year span, one at home. I knew I needed to spend time on my music career but was fixated on the death that lingered everywhere. Inside of me where my old memories and adventures had once lived, inside of the people I loved, inside of the walls of our town. It was a sleeping giant I didn’t want to wake up. So I tiptoed around the house, made music gently and quietly and within limit, and I wrote an EP called There’s More To Life as a mantra for myself to dream beyond that world. But I fell right back into the same holes.

On a whim, before I was ready, I moved to New York City, out of fear that I couldn’t move mountains until I moved out of my mom’s house. It wasn’t perfect. I saved up for years to produce and record music the way I wanted to again. I wore many hats, I worked many part time jobs. My friends helped me repaint my apartment, and I tried to let the old vision I had for myself get a fresh coat. I changed as a person. The thought started to settle in, tapping against my window like a runaway, that I could be anywhere but where I was, if I really wanted to. That I didn’t necessarily miss my great adventure…but that I had definitely held myself back from living it.

And so I wrote this album to finally look The Great Adventure in its face. This album helped me become myself, but it also helped me see that becoming yourself is a process that will never be finished. Just like the songs I’ve been working on. And part of the realization I’ve been coming back to over and over lately is that things aren’t meant to be entirely complete. There’s no point of arrival, not for my music career nor for my great adventure. There’s no chapter that’s going to wrap up my story so nicely that I get to stop writing it.

Holes In Our Stories is an acknowledgement of that. Not a resignation to it but a heartfelt embrace of the idea that imperfection is okay, that being unresolved is inevitable, that you leave off somewhere in life to begin again somewhere else. That when you’re torn up into a million different pieces, you are as much your complete self as when you’re feeling absolutely put together. And so I remain unfinished in many ways, as I’m sure you do too, but with that being said, with the optimistic belief that my story, my adventure is happening right now, as you’re reading this…I present to you HOLES IN OUR STORIES.

sndtrak stops by with an Album of the Day Feature of his most recent release, FLIPS V1: Triple Lindy