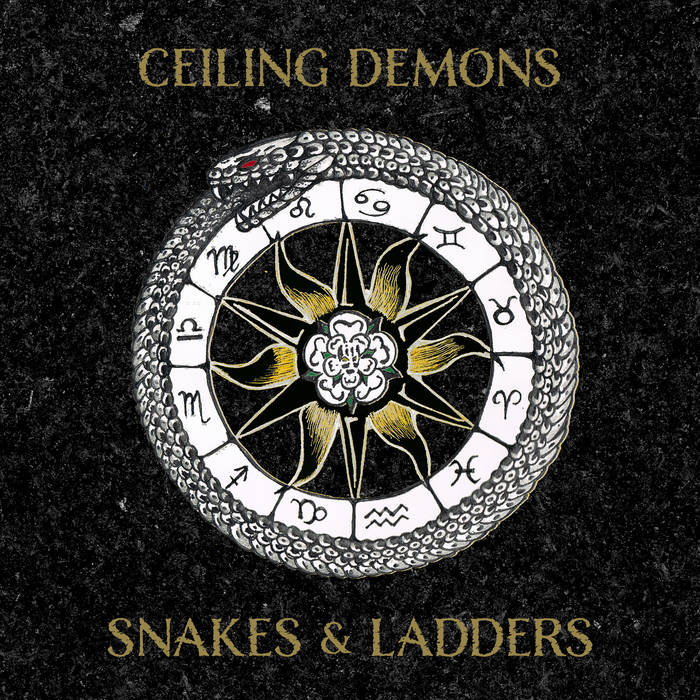 For better rates on UK/EU shipping, please order from: ceilingdemons.bandcamp.com

North Yorkshire’s alternative art-rap band, Ceiling Demons return with a new body of work titled ‘Snakes & Ladders’. After several years bubbling away in the cauldron of creation the eagerly awaited follow-up to ‘Nil’ is finally here!

The initial inception of the album took place when the group’s mercurial twin-brother wordsmiths, Psy Ceiling & Dan Demon were living apart, with one residing in their UK homeland and the other in Bavaria, Germany. During an emotional spell of separation and self-discovery, the bands future was unclear until the brothers reunited and the collective creative flame was sparked once again.

Metaphorically, this flame represented the ancient symbol of the phoenix bringing the rebirth of the band and their unique musical stylings. Upon returning home, the brothers would join Beat Demon, Shadow and S. Reed once more to gradually begin work on their next project. The following few years were spent experimenting further with live instrumentation and diverse song-writing methods. This would lead to astonishing, quicksilver arrangements in tracks like ‘Silver Birch’ and ‘Dust Of The North’ to the heart-wrenching acoustic ode about hope, ‘Freedom For The Living’, in which the brothers performed in the church cemetery of their hometown, where their lost friend now lays. Eventually the album started to take form with the help of some outstanding sound-alchemists.

Celtic jazz musician Andy Lawrenson was invited to enchant several songs with his otherworldly violin playing and Zarahruth was summoned to lend her exquisite, golden vocals throughout the album. Perhaps most surprisingly of all is that the band connected with legendary Jamaican music pioneer Lee ‘Scratch’ Perry to collaborate on two songs on the record - the folk-punk call to arms, ‘Freedom Fighting Dystopia’ and the prayer-like album closer ‘Reprise of Light’.

The combination of music and words throughout ‘Snakes & Ladders’ conjure images of the human condition and the universal truths we all bear. The outcome is a devastatingly important reflection of the times that encapsulate the socio-political hardships of global anxieties as well as the inner, individual struggle of existence with the on-going search for peace and acceptance. This is a rich body of work that highlights Ceiling Demons gift of drifting between genres, from fragile acoustic numbers like ‘All Let Go’, to slick electronic beats in the form of ‘From The Womb To The Grave’ and ‘Jupiter’ and powerful, post-rock inspired arrangements such as ‘Breathe’. This collection of songs highlights the group’s growth as a band and is arguably their strongest and most unique work to date.

All in all, ‘Snakes & Ladders’ is an album about cycles and structures. It is about life, death and rebirth and the constant rise and fall of all things. Tied into the stars and the seasons, this is a collection of songs about the chaos and calm of nature with a keen focus on the notion of freedom.

'Exciting, enticing & everything you’d never thought of before. Something really quite special.' - NARC. Magazine

Buy tickets for Ceschi and Ceiling Demons this fall:
linktr.ee/dualtree

All lyrics written and performed by Psy Ceiling & Dan Demon with additional lyrics by Zarahruth - Silver Birch, George ‘Beat Demon’ Ruston - Move with the Moon & Breathe and Lee ‘Scratch’ Perry -Freedom Fighting Dystopia & Reprise of Light. All songs produced and mixed by George 'Beat Demon' Ruston except From The Womb To The Grave & Jupiter - produced by Chris 'Shadow' Shaw.

In loving memory of Stephen Hatfield & David Long. Be at peace xo