by Sole and the Skyrider Band 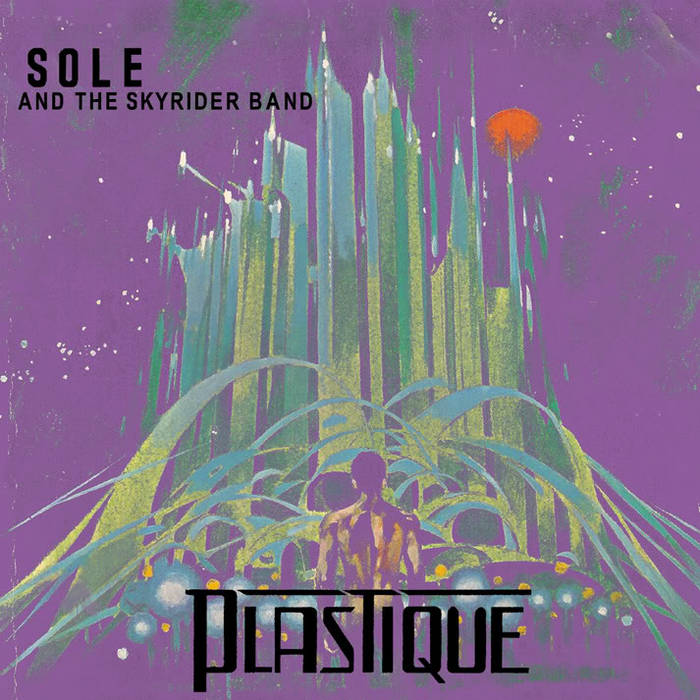 Plastique, the follow-up LP to Sole & the Skyrider Band's debut of the same name, is Sole's most cohesive, dynamic, listenable and interesting record to date. In contrast to the apocalyptic imagery of the first record, this album adopts the Jean Beaudrillard idea that "when the spectacle took over, man ceased to be man." What’s more, Skyrider's music finds itself more sparse and deliberate on this record.

The fact is the idea behind this album is less about politics and more about reflections on the postmodern mess that is the "me" generation. Sole bounces from the ironic to the iconoclastic, from the worldly to the deeply personal. Unlike many previous recordings, sole's rapping is at the forefront and his lyrics are clearer than ever. This is partly thanks to more immaculately composed music, and partly to Son Lux collaborator Doc Harril on the mixing boards.

Sole has spent the last two years living in a cabin in the midst of the Coconino National Forest in Arizona with no mayor, no phone lines, broken cell phone reception, just books and environmental canyon sprawl. This return to analog life inspired much of the reflection found herein. Everywhere man goes he is in conflict, and such conflicts are found throughout the album: the interpersonal, the political, the anti-social, the city, the desert, the industries and the anti-ideologies wherever they are found. Sole touches on everything from touring in a recession, media and war, race, rap, wildlife, space, identity politics and the insane tightrope one must walk to talk about such issues without sounding like a book report.

While Sole was communing with his inner Walt Whitman, the Skyrider Band relocated to Los Angeles. While there, multi-instrumentalist William Ryan Fritch began working on film soundtracks and as a session musician while working on his solo projects. John Wagner(drummer) and Bud Berning(producer) formed a new group with Telephone Jim Jesus called Furious Stylz. The trio have brought their dubbed out electro outfit up and down the west coast and have joined the rotation at the world renowned Low End Theory in LA.

Plastique opens with the line, "Now who am I? Lost in GPS infinity" from the song "Children of Privilege." Sole does his best to discuss our current epoch, "ridden with conspiracy, you can't blame us.... raised in front of a TV, we just wanna be famous." "Battlefields," featuring Markus Archer of the Notwist, is easily sole's catchiest song. It is based on touring & the basic premise that "Art is war" on all levels, all over a catchy dubbish guitar melody. "Longshots" is a tongue and cheek southern rap/punk song where sole professes, "I'm taking long shots, I got a long aim// my wife's related to Muhammad she got a long name// we in the southwest cookin at the ranch// that's where they tried to hang me but i broke the branch. "More" is Sole at his most transcendental; the chaos of nature over a catchy 5/4 standup bass track. The album ends with "Black," a monster epic jam, where sole makes plays on colors and comes up with new definitions for color in a "post racial America..." "White is the color of death, charred black is the new spring condominium."