by Gregory Pepper & His Problems 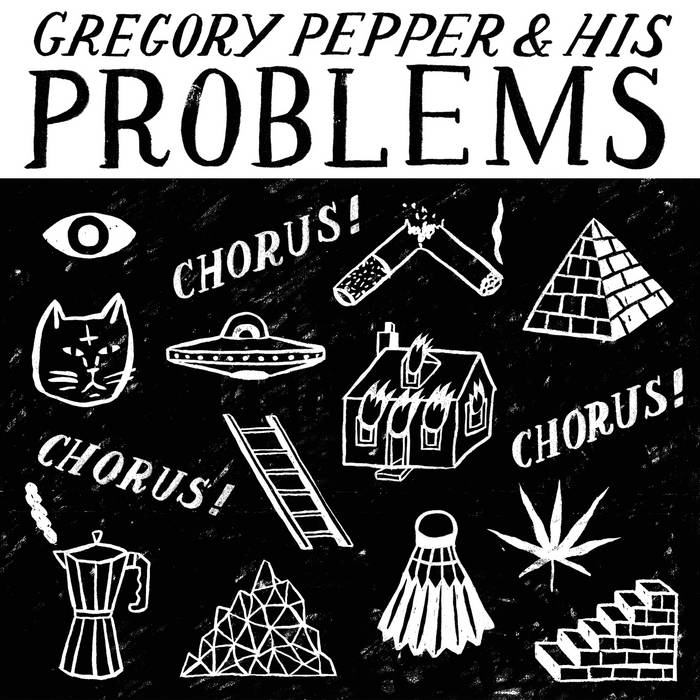 At this point, Gregory Pepper's been putting out albums for about as many years as this new one has minutes. He's concurrently savaged and celebrated pop music since 2005, beginning with his wide-ranging early output and moving on to increasingly focused work like the synth-devoted With Trumpets Flaring, or the more narrative-minded Return to Crystal Skull Mountain, or his hip-hop forays Common Grackle and Big Huge Truck. With each new project Pep's managed to reduce what can often soupy genres into a dope sauce that is unmistakably his own. Though his shortest to date, Chorus! Chorus! Chorus! – the title itself a wink at critics who complain about the objective spartan-ness of a Gregory Pepper song – manages to feel more thorough than those predecessors, mostly thanks to Pep's devotion to and evocation of a particular sound, a particular time and place.

On Chorus! Chorus! Chorus!, Pep happily dates himself, unabashedly outing himself as a 90s kid, a pre-teen for whom the moody earnestness of grunge was the pop music of the time. That scene seemed to off itself along with Cobain, and the next wave of power pop that came next was just as self-loathing, maybe even more cynical, but wasn't afraid to celebrate, mock, and pervert that angst. Chorus!'s conversation between large, muzzy rhythm guitar and piercing solos can seem like a direct, studied reference to Weezer's "Blue Album," but that association makes for more a surface hint of other like elements that have been operating in Pep's music all along: big dick guitar work, vocal harmonies and guitarmonies, and songcraft that all come off as confident but are ultimately there in support of an introspective, self-deprecating, sometimes even smart point of view. Chorus! sounds like the album Weezer should have made after Pinkerton, if Rivers' hadn't lost his nerve and Matt hadn't left: elusively confessional, proudly nostalgic, and as fun as crashing a shopping cart when you're drunk with plans on getting drunker.

In an indie music landscape that has been getting increasingly self-serious, Pep for years has been cultivating his own brand of ribaldry that's kin the power pop and pop punk that hit its commercial stride during his adolescence. Chorus! at once serves as a direct, nostalgic homage to that primordial scene while also carrying on and refining the monkeyshine Pep's been up to all along.

Recorded and mixed by David Partridge at HELM (Milton, ON)
Mastered by Andy Magoffin at House of Miracles (Cambridge, ON)
all songs written by Gregory Pepper and published by Fake Four Music (ASCAP)