by Awol One & Factor 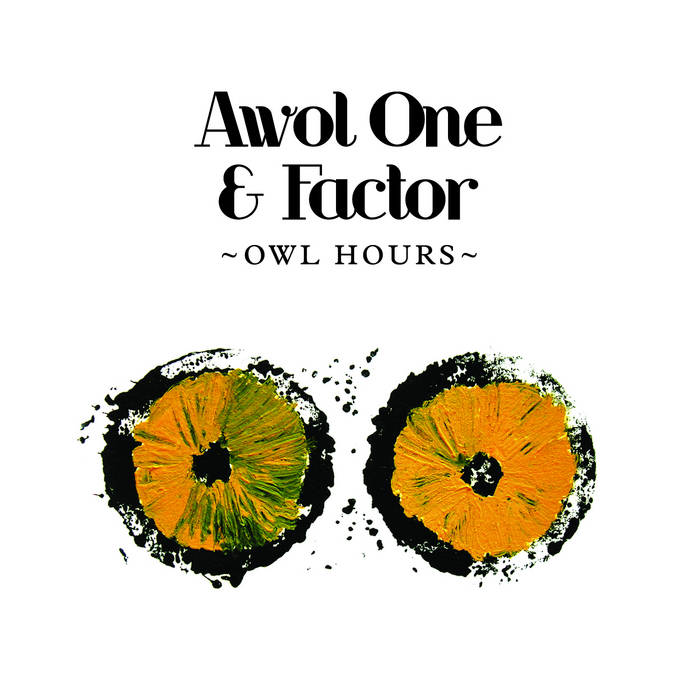 AWOL ONE, born Anthony Martin in East L.A. California, was born like any other kid...in a manger. His father, Portuguese, and his mother ,Irish, grew up poor on the east coast and moved to California where they met and conceived a little walrus. The walrus grew to love music and knew that he would do it forever, now in his early 30's he feels that he has recorded his best album yet, the upcoming Fake Four release "Owl Hours".

While touring through Canada a few years ago Awol met the Producer/DJ named Factor and began building a friendship and working relationship from there. In 2007 the duo of Awol One and Factor released "Only Death Can Kill You", a mellow hip hop record full of Awol's perfectly simple yet clever self analyzing lyrics and characteristic gruff voice over Factor's melodic and precisely crafted production. Over two years later they are releasing a completely different album - Owl Hours - what some would perceive as Awol and Factor's attempt at a "party album". Instrumentals move from Electronic Pop to Folk Hop with a number live musicians contributing their talents. Topics range from curious celebrations, to nostalgic odes to former loves to straight up drunken party anthems all told through the eccentric eyes of Walrus One. Guest vocalists on "Owl Hours" (including Aesop Rock, Myka 9, Tha Alkaholiks and executive producer Xzibit) all seem inspired and come off strong as ever over Factor's catchy, hard hitting beats. Fans of Awol's past work and former naysayers alike will all agree that this is an extremely enjoyable 35 minutes of music.

Over his nearly 15 year career Awol One has built a strong grassroots fan base from touring extensively throughout the US, Canada and Europe by himself and as a member of the legendary Shape Shifters crew. AWOL's music has been featured on MTV Road Rules, The Source Sound Lab, and magazines such as URB, Spin, XLR8R, Slap, Thrasher, Vice, Life Sucks Die, Mean Street, Big Time, Revolver, RapPages, L.A. Weekly, O.C Weekly and was winner of a 2002 LA Weekly Music Award. He has collaborated on tracks with very high profile hip hop artists such as KRS one, Kool Keith and Atmosphere just to name a few. Awol and Factor even rocked to packed crowds of teenybopper indie rock fans when they toured with Montreal band Islands in 2008. Through the years Awol continues to gain respect from artists and fans of all genres and never fails to keep his art and music completely real and original. To many "Owl Hours" will be an Awol One highlight.